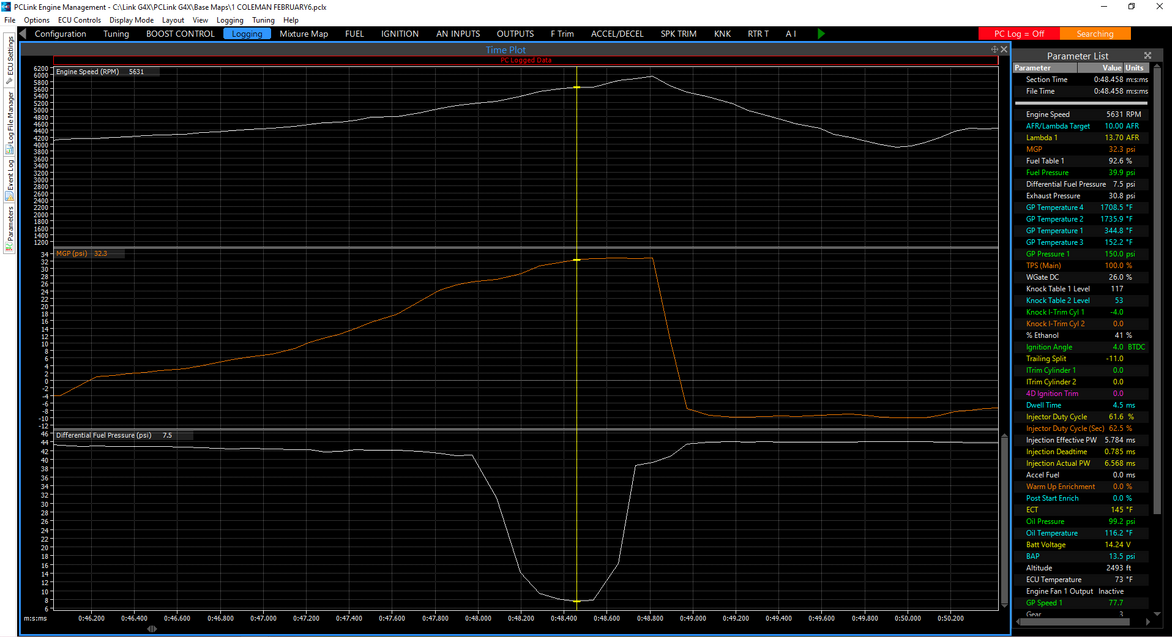 Imagine you are a private pilot flying an airplane in the middle of a cloudbank and you look to your instrument panel for guidence and all the instruments go dark.

Similarly, if you have an aftermarket ECU powering your FD, and you have a boost gauge and wideband alone, your engine is as much risk as the pilot in the cloudbank. Not only will proper instrumentation followed by proper responses to the info save your motor but in doing so will save you LOT$$ of money.

Instrumentation, compared to a new or rebuilt engine, is cheap. It also might make you feel like you are a genius because it tells you what is going on. Once you know that, it is easy to make the fix.

For instance, take yesterday... i was doing some road tuning specifically relating to re-setting my wastegate duty cycle as my Tial V60 wastegate was recently rebuilt. I lifted around 6000 as my boost was just over 30 psi. Other than the boost level, things looked really good.

Thanks to my digital fuel pressure sensor i noticed my Differential Fuel Pressure cratered for less than a half second from 43.5 psi to 7! It then recovered in less than 4 tenths of a second. All of this took place in three quarters of a second. At the same .753 of a second my boost went from 26.3 to 32.7. If i hadn't been logging fuel pressure i never would have known it. It was so short a blip that my AFRs hardly moved. After a thorough review of my wiring, relays, the Hellcat pump details, i concluded that it was momentary fuel starvation under heavy acceleration. i had about 10/11 gallons of gas onboard. I subsequently reinstalled my Hyperion fuel tank cover onto the sump box in the bottom of the gas tank and no more starvation.

If i hadn't seen the fuel pressure data i would have never been aware of the problem.

I have mantained that everyone with an aftermarket ECU should have a digital fuel pressure gauge. They cost around $125 and screw into the threaded port on your Aeromotive Fuel Pressure regulator. Chances are if you don't have one currently you have a small analog gauge in the port and use it to set your static fuel pressure. While it does get the job done as to the static setting it is useless when you really need it. When your right foot is on the floor and your motor is heading to redline you NEED to know your fuel pressure.

Simply stated, if your static setting is 43.5 and you are at 20 psi boost your fuel pressure needs to read 63.5. There are many reasons why it might not... your fuel pump is too small or tired, your fuel pump is not hard wired and is getting less 13.5 volts, your fuel filter is dirty, a fuel line is crimped. You could be sucking air, like me. I could go on.

The  point is, if your pressure is on the money you are golden. If not, you are heading for perhaps a call to your favorite engine builder OR you can just go down the probability tree and easily fix the problem before it becomes a PROBLEM.

Of course the biggest instrument of all is the ECU. This is the 21st century and if you have a turbo RX7 you are riding a rocket. Most of the sections of this website drive the point home that a mildly modded 13BREW is a highly stressed motor. Thanks to advances in micro-circuitry modern ECUs can do almost anything. For instance, after my drop in fuel pressure i enabled my ECU, if this were tp happen again, to cut timing to zero. On the next rotor face.

Events happen really fast within the turbo'd rotary architecture. Boost can explode.  During the same run as the fuel starvation boost increased from 24.0 to 32.8 psi in less than three quarters of a second. Should something go awry the response need to be literally instantaneous.

In the 21st century ECUs actively respond to and fix problems. In the 20th century they perhaps recorded the problematic data. The difference is often a potentially damaged motor being saved.